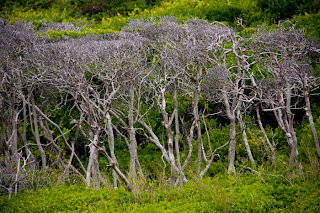 I'm shocked that it's been so long since I've posted here.  We have been making our acquaintance with the local hospital and cardiologists as the hubs decided to have another "event" as soon as we arrived.  Nothing major, but enough to cause concerns.  Sigh.  Two rounds of company later - already planned and sorely needed - the hubs on new meds - I finally got a haircut - we are back into Relax Mode. 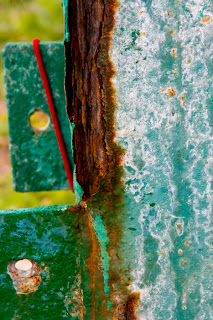 This place is paradise.  There is a magical, mystical quality to the air here.  It's fresh, clean and fills my lungs like nothing else.  Remember as a child that feeling you got in your lungs after swimming all day?  Or being outside all day?  How fresh the inside of your lungs feel?  And how relaxed your body is?  It's that. 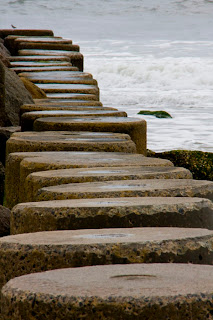 I've begun to do something I call "walking the labyrinth."  Solitary walks along the beaches, or boardwalks, or pathways.  Mainly the beaches.  Most times the camera isn't invited because of the constant wind and sand.  The companion in my hand is a net/bag within which I place treasures.  Pieces of metal and pottery from shipwrecks that line the coast, usually just offshore.  Shipwrecks from Civil War and the WW's.  Special shells.  And trash, of course.  I'm only now beginning to learn the local history. 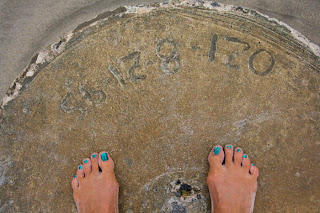 At the river/lake my Summer Toe color was a cool blue.  Here, I've found a bright shade of turquoise called "Ocean," which fits my new persona.  Turquoise, fuchsia and bright white are my new colors.  The beach is sinking into my psyche. 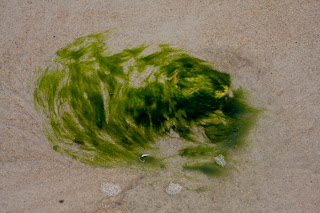 This is a terrible photograph of a moss or seaweed covered rock.  These dot the shoreline in a particular place.  I've discovered (thanks to Sky) a place to go photograph that looks like Ireland.  Not that I've been to Ireland, but what my mind envisions Ireland to look like.  One day, one day. 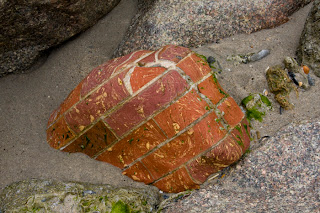 Is this not the coolest thing?  Old bricks?  This one was found along a rock barrier sea wall.  I'm not sure what they are, but I've found some in the yard as well and will investigate with the locals at some point. 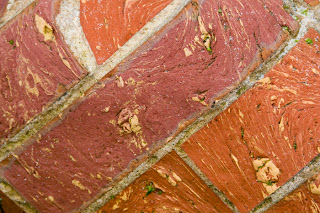 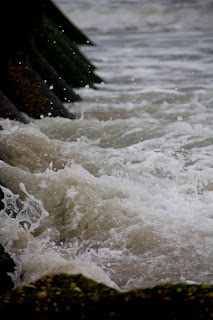 Sometimes one has to get off the computer, walk the earth and soak up new things.  This is my time.  When the temperature outside reaches 500 degrees Fahrenheit, I'll be back inside doing computery things.  In the meantime, you'll find me out walking the labyrinth.
Posted by The Giraffe Head Tree at 9:16 AM 7 comments:

The words and photographs on this site belong to me. However, I am a reasonable and sharing kind of gal and if you'd like to publish a post or some photos I'm positive something can be worked out. Please do me the favor of contacting me before doing so - I'm really nice and easy to talk to, and I would really, really appreciate it. Head to the "About Me" section, below, and click to e-mail. Thanks, and happy blogging!

The Giraffe Head Tree
This is about my passions - photography, writing, travel, birds, butterflies, gardening, trees, and whatever strikes my fancy on any given day.

This Chick Knows Her Stuff!

It Starts With Me 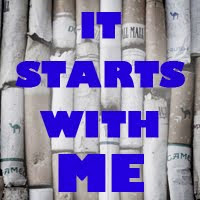 Getting back to business....

Promote Your Page Too